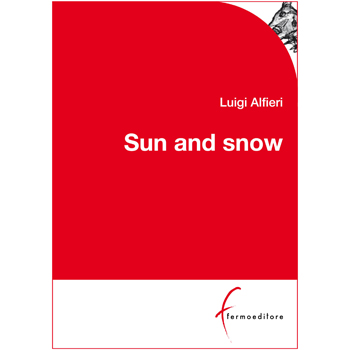 Sun and snow is composed by 142 mini stories or ‘confetti’, arranged in order of casual appearance: only after reading all of them can we finally discover the plot of a single tale. Set in the area of Parma during the 1960s, the story spans over a period of fourteen years – from the age of innocence to the realization of death – through the succession of months and seasons, observing the changes in nature, and remembering the pleasure of living immersed in the passage of time. Beginning and ending in June, we witness a boy becoming an adult, amidst the woods, fields, skies, rivers and changing colors and lights, all emanating new fragrances. Alongside the story’s protagonists, the innocent boy and countryside are an ample chorus of characters narrated in just a few lines; one of these characters, the father, through his death, slowly becomes the true hero.

In the pdf format, the texts are accompanied by the drawings of a great artist, Enrico Robusti. The images are not present to illustrate the volume, but to reread the story with the same reality, the same human and natural situations, through a different viewpoint, another soul and sensibility. The images form a book within a book, the painter becoming the writer of a parallel tale: while the words in Alfieri’s texts often evoke colors, the drawings by Robusti show colors that often speak in words. The representation of life, happiness, nature, love and death can differ from one person to another – and in this case, from page to page, and sign to sign.

Luigi Alfieri (Cella di Palmia, Parma, 1957) is a travel journalist. He has been president of Neos, an association that regroups journalists and photographers in the sector. His books include both fiction and non-fiction works (among which Il piccolo Socrate, published by Guanda), as well as books on food and current events. He has produced a feature length film on drug addiction, broadcast by Rai Uno. He is editor in chief of the Gazzetta di Parma, Italy’s most historic daily newspaper, and has collaborated for over a decade with La Stampa of Turin. He has organized photographic exhibits and conventions on travel, poetry and literature in general.

Enrico Robusti is an artist based in Parma. Following classical studies and a law degree, he dedicated himself to painting, with a special interest in the 17th century works of Van Dick and Rubens. In 1991, he was presented by Federico Zeri in an exhibition of portraits at the Consigli Arte. From that moment onwards, Robusti made portrait painting his profession. Since 2004, he has undertaken a new expressive path, garnering a number of significant national and international awards, including a personal exhibit at the Albemarle Gallery in London in 2011, and participating in the 54th Venice Biennale.