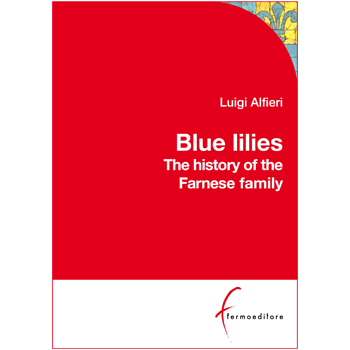 Blue Lilies is the story of the Farnese family, a blend of heavily-researched history and literary text with a dash of soap opera: power, money, blood, sexual calculation and promiscuity, intrigue, and seemingly unstoppable social ascent. Blue Lilies tells of the birth, rise, and extinction of a family that in the short space of fifty years leapt from low-ranking rural aristocracy to the highest society of Rome. The dynasty’s founder would become Pope and his grandsons the rulers of an independent state. The Farnese family gave the world Pope Paul III, five Cardinals, eight Dukes of Parma and Piacenza, three Governors of the Low Countries, perhaps the greatest general since Julius Caesar, and a Queen of Spain. Both mercenary and highly-cultured, they commissioned the Farnese Palace, the Church of the Gésu, and the Farnese Gardens in Rome, not to mention the stupendous villa of Caprarola not far outside the capital. And as patrons of the arts, they protected men of the caliber of Michelangelo, Titian, Vignola, Taddeo Zuccari, Claudio Monteverdi, and Correggio.

Luigi Alfieri (Cella di Palmia, Parma, 1957) is a travel journalist. He has been president of Neos, an association that regroups journalists and photographers in the sector. His books include both fiction and non-fiction works (among which Il piccolo Socrate, published by Guanda), as well as books on food and current events. He has produced a feature length film on drug addiction, broadcast by Rai Uno. He is editor in chief of the Gazzetta di Parma, Italy’s most historic daily newspaper, and has collaborated for over a decade with La Stampa of Turin. He has organized photographic exhibits and conventions on travel, poetry and literature in general.