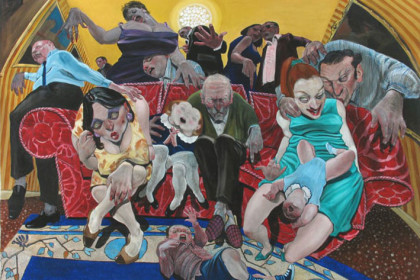 A painting by Enrico Robusti – and I speak of the newer ones – is neither calming nor reassuring.

Yet Enrico Robusti’s career, born in Parma, starts out in an entirely different manner. After classical studies and a law degree, he has devoted himself to the study of painting techniques, with particular reference to the seventeenth-century van Dick and Rubens school. In 1986 he had his debut with the exhibition De rerum natura at the Consigli Arte, Parma. In 1991 he was presented by Federico Zeri in the same gallery as part of an exhibition of portraits. From that moment the portraits have became his profession.

The turning point in his expressive streak can be traced to 2004, the year of the Bar Italia exhibition at the Annovi gallery of Modena, presented in the catalogue by Gene Gnocchi. In the same year he exhibits in Turin, at the Pinxit gallery with the exhibition E.R. In 2005 he is among the contemporary artists at Il Male (The Evil) exhibition. Esercizi di pittura crudele (Exercises in cruel painting) at the Royal hunting Palace in Stupinigi (TO), curated by Vittorio Sgarbi; in July the city of Rome chose the canvas entitled “Se penso che domani dovremo pagare l’affitto avverto un senso di vertigine” (If I think that tomorrow we have to pay the rent I feel dizzy) as the poster for the celebrations of the 40th anniversary of the moon landing.

Numerous personal and group exhibitions in Italy and abroad follow. In June 2011 he was chosen among the 54th Venice Biennale participants and inaugurates two personal exhibitions: one at the Pow Gallery of Turin and the other at the Albemarle Gallery of London.

As stated long ago, Enrico Robust loves the everyday life theme. «I always stumble into it because man always finds himself in an inadequate situation, even where, as in the newspapers, we should feel safe». His characters are caricatures, but according to art critic Alberto Agazzani, «truth more true than the truth».

What led you to completely change the style, what clicked?

«It was latent within me for some time. I saw these flashes and insights that needed to mature, then at some point in your life something clicks and feel that you “can”. It might be the vision you have of life or that vague sense of disappointment that I believe we all share a bit. It might be the desire to draw the sum …. in short, you feel that you “can”. Then the extremes, at times, you realize they coincide; sometimes, however, you need to pull out what you have accumulated and sedimented and then, it happens that the canvas is full of “heavy” thoughts and you feel compelled to paint the “man” in his dramatic inadequacy in front of life and death and the contours … exactly those, from the joke».

You had your first personal exhibition in Parma only in 2011. How come?

«Strangely I succeeded more easily in my journey from outside… I returned to my town as Ulysses after several pilgrimages. We are not in the presence of a “nostos”, but rather of a need to stop in a familiar place to gather energy before starting off again…».

Where are your paintings exhibited at the moment?

«I have two paintings exhibited at the Turin biennale until January 30. It is the last flick of the tail of the Venice Biennale in which I participated with a large painting exhibited at the Arsenale». 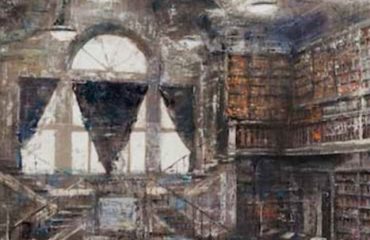 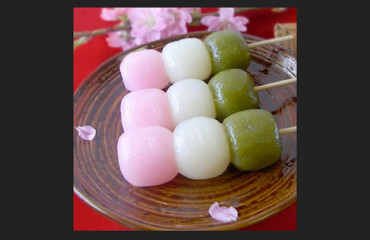