With respect and sympathy. After the Wonder Women Special Issue released the last March, as we have proposed in the editorial of that number, we dedicate a strong core of this new magazine to Elizabeth II of England, very popular Queen at home and abroad, the Queen who has just completed 91 years, the queen still does not hesitate in the face of the situation – euphemistic to define it difficult – of her country, tied up with Brexit and with repeated acts of terrorism that strike it with violence.

We have decided to pay homage to a sovereign in the year of her Sapphire Jubilee, which allowed her to conquer the title of longest monarch on the throne. Just a few days ago, Elizabeth II delivered her Queen’s Speech for the assembled rooms, the House of Lords and the House of Commons: for the first time she presented herself without the Prince consort – hospitalized – and accompanied by Charles, Prince of Wales. She appeared without the crown, with a lilac hat decorated with matching flowers, an overcoat of the same color and a yellow dress with matching flowers. We do not linger on the look of her dress for pure news, but because in a dedicated Special Issue you could not miss an analysis of the hats of the British sovereign who have always attracted the attention of Medias, fashion and, as you can read in the article, designers. The affectionate and respectable fondness that Elisabeth arouses in us reveals with amused irony in Francesca Codeluppi’s words – and even more in pictures – that, thanks to an accurate investigation proper of a detective, she discovered the best of the gadgets that see the Queen as protagonist and which feed a good slice of London trade for tourists (it would be interesting to get in from the inside the subject: the British are passionate about the “royal” objects so much as we, naive travelers, are?).

A leap back in history gives us the image of the sovereign, not yet crowned, during her military service in the Second World War: no large endeavors were entrusted – after all she was a little girl … – but she put her royal hands inside military truck engines to repair them or, seated not on a throne but on the seat, she had the task of driving them.

The Special Issue closes with two absolutely great British classics: the rite of the teatime, investigated through sets of cups, teapots and accessories that celebrate anniversaries and jubilees, and on the other side the famous song symbol of the protest to her role, to her power: God saves the Queen by Sex Pistols. But, on a closer inspection, another article can be linked to all of these: it made sensation, and astonishes the skeptical, the new Damien Hirst exhibition at the two locations of François Pinault in Venice: he, 100% English, former “Bad boy” of contemporary art, has built a tale that literally leaves to open mouth. We wonder what Elisabeth would think of it if she visited Palazzo Grassi and Punta della Dogana…

Other articles complete this issue of Fermomag, but one in particular we are definitely proud: that on Conrad Marca-Relli, an American artist, transplanted in Italy and in particular in Parma a fine career that has passionate a young and good student of Boston College during her studies in the Emilia city. A sincere thanks to Kate Larkin and the Niccoli Art Gallery in Parma for giving us the former the article, the latter the story and the images, of one of the great artists of the twentieth century. 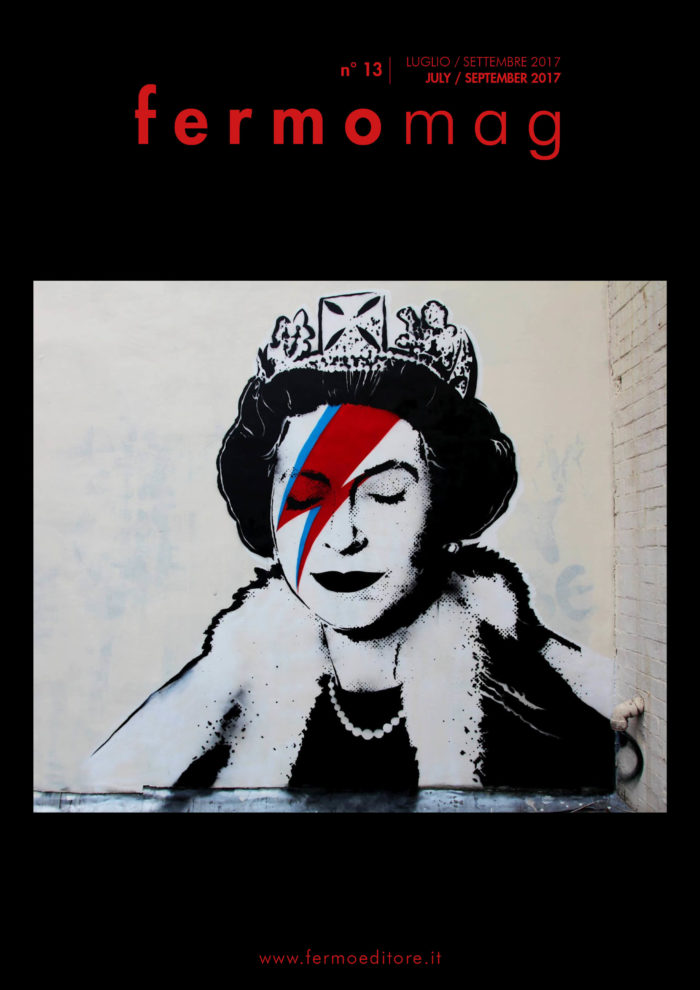