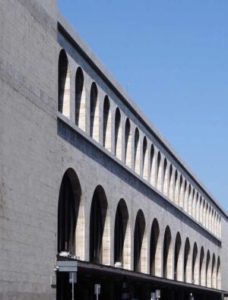 The Fascist period still appears as a field of study, full of ideas. Arouse interest, for example, the complex and sometimes obscure institutional dynamics that have presided over the idea of State Architecture, which, recognizable throughout the “boot”, including the islands, characterizes the image of the State throughout the national territory. Ports, railways, post offices, Justice palaces, chambers of commerce and every other public building in those years, respect the eclectic nature dictated by the desire to combine autarchic instances of “Roman and Italic” classic to fascist modernity.

The day after the fall of the regime the cleansing process that hit the major state offices has meant that some major figures, considered inconvenient only by those who came to power, suddenly disappeared without a trace. It is certainly not the case of Marcello Piacentini. The history and work of Angiolo Mazzoni deserve a chapter in art history books or architecture, which still ignore him. The senior engineer, before he died, put his papers and his memoirs in order and, thanks to Federico Zeri, he donated them to the community.

In 1919 he graduated in Rome in Civil Engineering, in 1923 he graduated in Architecture and teaching qualifications of Architectural Design at the Academy of Fine Arts in Bologna. During the First World War was on duty at the Directorate of Military Engineers of Bologna. In 1921 he was hired in the railway, at first in the Special Section of Milan works, then at work Division of Bologna and finally, in March 1924 moved to Rome, to the work and construction service, of the General Directorate of Railway. He will direct the office until 1945, overseeing the design of numerous railway stations and among the most interesting post offices.

Accused of designing “anti-fascist architectures” or “not in harmony with the local architectural environment”, while covering an assignment as state official, it was very difficult for him to get the approval from various committees and the consent of the powerful Costanzo Ciano. With the support of some of his knowledgeable superiors, and in some cases even of Mussolini, he was able to realize the railway stations in Siena, Montecatini Terme, Messina Central, Latina; the post office of Pula, Agrigento, Abetone, Ostia Lido, Palermo, Ragusa, La Spezia, Sabaudia, Latina; thermal plant for the Florence Station, the marine colony of Calambrone, testimony of his deep ties with the international modernist and constructivist movement.

In May 1933 he joined the Futurist Movement fully committing to the controversy over the formation of a “national fascist culture and for the establishment of a State art and architecture”, which counterposed by the years new futurists, twentieth-century architects and rationalists. Mazzoni thinks, designs and manufactures among the most intelligent architectures that that regime has never given birth. All his buildings, of which he cured every detail, are designed according to the criteria of modernism and functionalism, elegant and monumental architectural achievements cleverly integrated into the urban pattern, and characterized by the use of cultured and elegant “mixedmaterial and polychromatic” as Antonio Sant’Elia’s sole heir.

In 1948, purged, he moved to Colombia, accepting the chair of Architecture and urban design at the University of Bogota. Here he is very active designing an architecture linked to that local tradition and that environment, testing the possibilities of composition and color constructive. He returned to Italy only in 1963 and settled in Rome, where he devoted himself to the reconstruction of his personal library now in the MART in Rovereto. He died on September 28th, 1979. 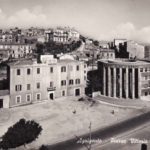 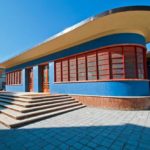 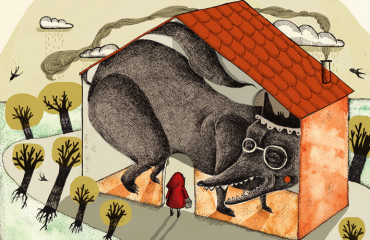 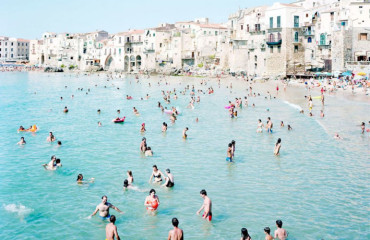